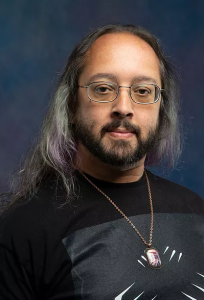 He shows his work at local, national, and international science fiction & fantasy conventions.

Rob Carlos started his art career working as a digital graphic designer for a printing company in Florida, illustrating the D&D games he ran with friends and drawing and painting whenever possible. When that company folded, he started selling prints on his website (the worldwide web was a brand new thing at that point) and was asked to do some paintings for the Robert Jordan Wheel of Time TCG, starting his official professional work as a fantasy artist.

​In 2001, Rob, Jean and their daughter Josalyn moved from Florida to the Seattle/Tacoma area, and discovered the convention world that exists up here. A couple of years later, a bookstore/art gallery in Kent, WA called “Browser’s Books” was displaying and selling work by local artist Amy Brown, and decided to add Rob to their walls as well. Browser’s Books became Rob’s home base for many years, and most of his paintings from that time started as sketches done there in the bookstore.

In 2007, Rob started showing his work at Norwescon, and other sci-fi/ fantasy conventions. For years, Rob concentrated on illustrating for independent and small-press writers and musicians. During that time, Add An Accent produced a line of pewter dragons and ceramic tiles based on Rob’s artwork. Recently, MGL licensing in London has chosen to represent Rob, and there should be many more new products to look forward to in years to come! Meanwhile, Rob stays busy doing both self-directed and commercial painting projects, drawing people’s personal dragons, and occasionally creating enormous murals for locations around Washington and Oregon.