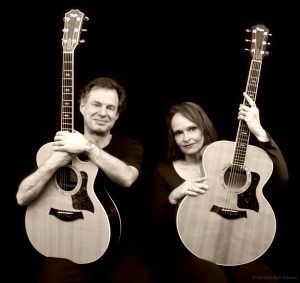 Jeff and Maya Bohnhoff are a Northern California based musical duo who have been performing together for 40 years.

Maya is a powerful singer with a beautiful voice, and Jeff is a skilled guitarist. After encountering the filk music community in 1995, they became known for their wicked parodies of classic rock songs, as well as for original acoustic/electric rock music. They have released 7 albums, including their latest collection of parodies Schrödinger’s Hairball. Their 2010 parody of Bohemian Rhapsody, Midichlorian Rhapsody went viral on YouTube, with over 830,000 views so far. They have won multiple Pegasus awards as performers and songwriters, and have been Guests of Honor at cons all over the world. Maya is also a noted author, with a bibliography that covers science fiction, fantasy and mystery. Her latest novel is a Gina Miyoko mystery The Antiquities Hunter. Jeff is a recording engineer and producer, with credits including albums by Sunnie Larsen, Betsy Tinney, Seanan McGuire, Mary Crowell, and many others in the filk community.