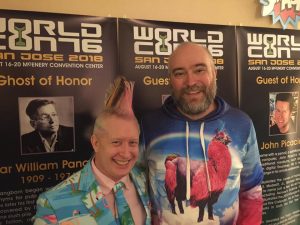 They have been hoax bidding many conventions, such as WorldCon 2008 & Westercon 2009.

Kevin Roche has been making costumes since he was 8, and is also the chair of Worldcon 76 in San Jose. In his secret identity as a research scientist at IBM Research Almaden, he’s hard at work wrangling giant robot vacuum chambers and electrons in atomically engineered materials, and is an IBM Q Ambassador, explaining the weird world of quantum computers to audiences around the world.

Kevin and his husband Andy Trembley set out in 2002 to bring Costume-Con back to California, and ~900 hundred costumers showed up at CC26 in 2008 to join the fun. More recently, Kevin and Andy threw an olive tasting/bid hoax party at a Westercon, culminating in their co-chairing Westercon 66 for nearly 800 people in Sacramento July 4 weekend last year

Andy chaired the successful SJ in 2018 Worldcon bid; as a result, Kevin is now the Chair of Worldcon 76 in San Jose, the 2018 World Science a Fiction Convention.

Kevin also created Thinbot, the gold-medal winner in robotic bartending at Robogames, the international robotics competition, in 2012, 2013, 2015 and 2016. Thinbot is not infrequently found hard at work serving visitors to Kevin and Andy’s parties at conventions.

As part of the San Jose Worldcon bid, Kevin designed and constructed the San Jose Galactic LIght Tower, a 32’ tall (1/10 scale) replica of the historic San Jose Electric Light Tower, which was first exhibited at MidAmeriCon II, the 2016 Worldcon. The tower incorporates 3000 addressable animated LEDs, controlled via cell phone app. (photos of the tower are also viewable at its facebook gallery). The SJ Galactic Tower won the gold medal for Static Art Bots at the 2018 International Robogames.

Kevin is also the editor of Yipe! The Costume Fanzine of Record (www.yipezine.com),

Andrew Trembley – Andy found organized fandom in semi-rural Wisconsin when he learned of a SCA shire in his hometown. SCA led to costuming, filking and APAs. Costuming, filking and APAs led to conventions, and that led to attending events all over the upper-midwest. It also led to his move to Milwaukee, and his participation in Lytheria, a fannish rooming house in a big old Victorian neo-Classical mansion. Lytheria was an unmatched crash-course in fannish community and hospitality.

Nearly 20 years ago, he (and a group of friends) drove from Milwaukee to Costume-Con 16 in St. Louis, where he met Kevin Roche. After a whirlwind long-distance year, Andy moved to California.

He’s looking forward to the completion of a successful Worldcon 76, and having time for new adventures.